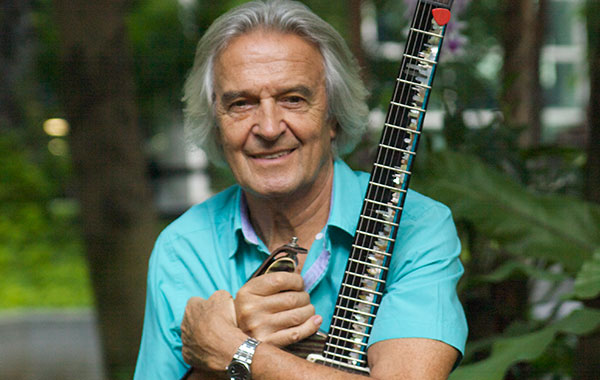 It’s been two years since John McLaughlin released the highly acclaimed To the One (Abstract Logix, 2010) – his first studio recording with The 4th Dimension, the veteran guitar innovator’s second longest-standing group since the east-meets-west fusion of Shakti. Comments like “…listening to his improvisations…leaves no doubt that [McLaughlin] is in inspired creative form,” (Ian Patterson, AllAboutJazz.com), and “…this tight 40-minute document hums with a collaborative energy.” (John Fordham, The Guardian) left little doubt that McLaughlin’s return to the electrified fusion he first innovated more than 40 years ago in groups led by trumpet icon Miles Davis and drum legend Tony Williams – and, of course, with his own earth-shattering Mahavishnu Orchestra – was as inimitably electrifying and exhilarating as ever.

While Now Here This reflects a slightly (but significantly) altered 4th Dimension – specifically the recruitment of powerhouse Indian drummer Ranjit Barot, first heard on the guitarist’s 2008 Abstract Logix debut, Floating Point – the markers which have defined this group as one of McLaughlin’s best pedal-to-the-metal fusion outfits since Mahavishnu Orchestra remain intact, but with an even greater finesse to contrast with its unfettered power and visceral energy. Cameroon-born/Paris-resident bassist Etienne M’Bappe is back from To the One, as is keyboardist/drummer Gary Husband, The 4th Dimension’s only other founding member, first heard on the guitarist’s acclaimed Industrial Zen (Verve, 2006).

Despite there being no overt concept as an undercurrent to Now Here This – To the One being an homage to saxophonist John Coltrane’s spiritual search, one not unlike McLaughlin’s own lifetime pursuit – this set of eight new McLaughlin originals is connected by the guitarist’s decades-long fascination with Indian music, his effortless virtuosity, and a relentless lyricism that remains a touchstone, even when the guitarist is shredding at near-light speed. Husband’s stunning contribution to Now Here This will put to rest any suggestions that his keyboard playing is secondary to his kit work, though he continues to bring no shortage of percussive power to The 4th Dimension as well – albeit even more successfully, with Barot in the drum chair. And if M’Bappe possesses no shortage of chops, his ability to bring them to the table without sacrificing groove and, when required, the need for space make him the ideal complement to his band mates.

If To the One was “…quite simply, McLaughlin’s best album in well over a decade…“ (John Kelman, AllAboutJazz.com), Now Here This ups the ante even further with greater fire, finesse and freewheeling interplay. An album certain to thrill longtime McLaughlin fans, for those new to his incendiary nexus of Indo-centric rhythmic complexities, innovative harmonic devices and unparalleled improvisational élan, Now Here This is the perfect introduction – one that will surely encourage them to also dive, head-first, into this legendary guitarist’s lengthy and groundbreaking discography.