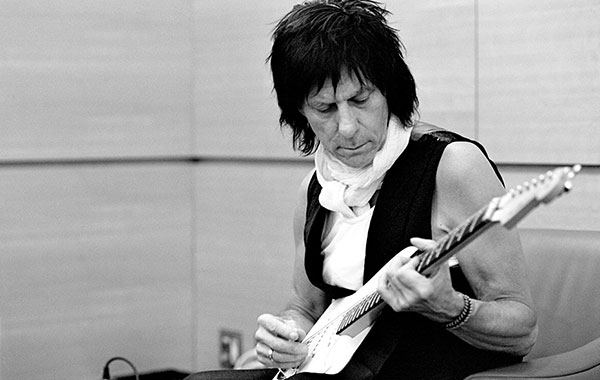 On his first studio album in nearly seven years, the delightfully unpredictable Jeff Beck astonishes once again with EMOTION & COMMOTION. “I hate to ruin the surprise by talking about it, but I think this album will shock people a bit when they hear it. It’s not what people would expect of me,” says the multi-Grammy® winning guitar virtuoso.

It’s a bold statement from a groundbreaking artist who’s inimitable combination of primal shredding and cool perfectionism has left an indelible mark on everything from hard rock and jazz fusion to rockabilly and techno during the past 40-plus years.

Beck adds another style to that list with an album that complements the innovative tones he coaxes from his Stratocaster with a 64-piece orchestra. The remarkable combination shines on a range on songs, from Puccini’s aria “Nessun Dorma” and “Elegy For Dunkirk” from the film Atonement to “Somewhere Over The Rainbow” from The Wizard of Oz and an interpretation of “Corpus Christi Carol.”

Beck says the idea for pairing guitar with an orchestra evolved from a version of Gustav Mahler’s Symphony No. 5 he recorded a few years ago. “It turned out amazingly well, but I didn’t want to commit to an entire album of classical music. What appealed to me instead was the idea of bringing together these seemingly incongruous styles on different kinds of non-classical music.”

Beck recorded EMOTION & COMMOTION late last year at Sarm Studio’s in London with the award-winning producers Steve Lipson and Trevor Horn. “Making this record took me back to the feeling I had making Blow By Blow,” he says referring to 1975’s groundbreaking jazz-fusion classic. “Partly because the orchestrations reminded me of working with George Martin, but mostly because there was a lack of preparation for both that forced me to be open. From one day to the next, I had no idea what I was going to do. It kept things fresh.”

To create the album’s diverse sound, Beck used a number of musicians, including appearances by frequent collaborators Vinnie Colaiuta (drums), Jason Rebello (keyboards), and Tal Wilkenfeld (bass). The album also features vocal contributions from Imelda May (“Lilac Wine”) and Grammy-winner Joss Stone (“I Put A Spell On You” and “There’s No Other Me”).

Opera singer Olivia Safe is featured as well, her ethereal voice soaring alongside Beck’s soulful lead on “Elegy For Dunkirk.” At times their sounds overlap, becoming indistinguishably intertwined. “The Stratocaster, especially with the delicate use of the whammy arm, has an amazing capacity to simulate the human voice,” he says. “I’m not trying to out-shred anybody or pull of ludicrous runs to express my emotions. What interests me now is trying to sing through the guitar.”

Beck’s six-string voice takes full flight on “Somewhere Over The Rainbow,” capturing the exquisite ache of Judy Garland’s performance on the original. “Her singing is laced with such raw emotion that it sounds like she’s going to burst into tears at any moment. If I captured even half of that, I’m happy.”

In addition to the orchestral pieces, EMOTION & COMMOTION showcases several original compositions. For “Hammerhead,” Beck fires the rocker’s opening salvo through his wah-wah pedal before falling into the deep groove carved out by the rhythm section and horns. At the opposite end of the sonic spectrum, the airy arrangement that elevates “Never Alone” provides a wide-angle soundscape where Beck’s imagination is free to explore the high-flying melody.

On this album, and throughout his career, Beck routinely makes the fantastically difficult sound effortless. What makes his playing even more impressive here is that on several songs he’s doing it with the index finger on his playing hand completely out of commission. “I cut the tip off with a chef’s knife right before the last sessions, when I was scheduled to overdub solos for several songs, including ‘Somewhere Over The Rainbow,’ ‘Elegy For Dunkirk’ and ‘There’s No Other Me.’”

Determined to complete the album, Beck soldiered on. “I found I could do quite a lot with the remaining fingers,” he says. “It forced me to make adjustments; basically relearn how to play within these new constraints.”

Thankfully, Beck is regaining feeling in that finger in time to launch a world tour to support EMOTION & COMMOTION. In February, he will unite with Eric Clapton for a series of exclusive shows in London, New York City, Toronto and Montreal. Both artists will play separately before taking the stage to perform together.

“We played a few shows in Japan at the Saitama Super Arena last February that came off really well and we thought why not do it again,” Beck says. Other than a few benefits and festivals, the guitar legends had not previously shared a stage at a major arena. Ironically, Beck replaced Clapton in The Yardbirds when Clapton left the band in 1965.

After the shows with Clapton, Beck will play South Korea, Hong Kong, Australia and Japan before returning to America for the U.S. leg of their tour starting mid April and including an appearance at the New Orleans Jazz Festival on May 1.

For Beck, the new album and tour follows in the wake of a triumphant 2009 – his most successful year ever. Among the many highlights were a sold-out world tour; his second induction into the Rock and Roll Hall of Fame; the release of the platinum-selling Performing This Week… Live at Ronnie Scott’s, which earned a Grammy nomination for “A Day In The Life”; and magnificent performances with his band at the 25th Anniversary Concert of the Rock and Roll Hall of Fame at Madison Square Garden.