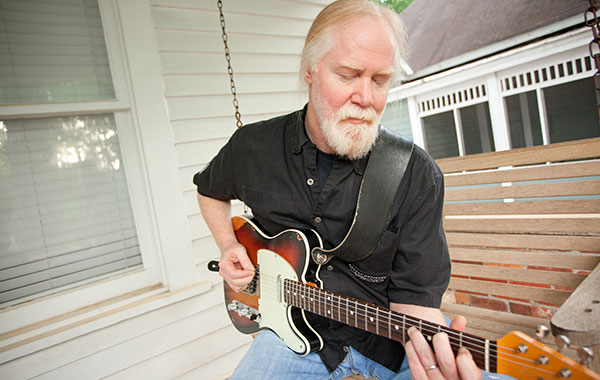 A peerless musician, possessing formidable technical resources, ample imagination, and improvisational grace, Jimmy Herring has thrived alongside some of the most demanding and iconic figures in contemporary music. From his ongoing role as lead guitarist in Widespread Panic to his stints with the Allman Brothers, the Other Ones, Colonel Bruce Hampton and the Aquarium Rescue Unit, and his co-lead trio Project Z, Herring has consistently elevated any number of musical environments with his fearless, fluid, and responsive guitar work.

When working on his own music, he continues to challenge himself. For his second solo album, Subject to Change Without Notice—available via Abstract Logix on August 21, 2012—Herring set out to make an instrumental album inspired by the first-person soulfulness of the human voice. “Nothing will ever be the human voice,” he reflects. “But I want to get as close as I can to that sound with a guitar. That’s the most wonderful instrument of all.” The result is eclectic and wide-ranging, but tied together with an uncommon melodicism and uncluttered compositional clarity rare in instrumental music.

Rather than hiding behind dense harmonies and unrelentingly complex rhythmic figures, Herring lets his music draw breath, with an immediacy and warmth stoked by his love of plainspoken Americana, country, and folk forms. “If it were all jazz harmony and lots of notes,” he explains from his home in Atlanta, Georgia, “it would only express one piece of what I love about music. I want my music to make you feel something. From all my experiences and all that I’ve taken in, that’s what I’m hanging on to as I get older. You can impress people with technical things, but it doesn’t make them feel anything. Technique is a tool. No one cares if you can play 64th notes if you have nothing to say.”

Drawing from his deep love of great singers and direct songwriting, Herring has put his masterful chops in service of pure melody. While Subject to Change Without Notice investigates a number of different styles, it is given coherence by Herring’s unerring melodic sensibility and expressive guitar tone. He boldly resists the urge to needlessly complicate his music. “I’ve always loved simple songs,” he says. “Some people don’t expect that when you do an instrumental record, but big, open-hearted melodies are just as important as anything else. Man, a simple song with basic chords, that’s just a beautiful place to be.”

Producer John Keane was an ideal ally in this fruitful endeavor. Not readily associated with instrumental music, Keane (who is also a remarkable pedal steel player and recording engineer) is best known for his production and engineering work with such song-driven outfits as REM, the Indigo Girls, and Cowboy Junkies, to name but a few. His touch was essential to realizing Herring’s vision of an instrumental album possessing genuine emotional depth.

“Keane is absolutely brilliant,” Herring says, enthusiastically. “Through learning Widepsread’s material, I had the studio records that they made with him. They just blew me away. Then when I made the Dirty Side Down record with him and Panic, and I was in awe of his ideas and his engineering. He’s every bit as good an engineer as any musician is on his or her instrument. And I love his steel playing. It’s not a virtuoso sound: It’s a texture within the music that brings this hymnal, angelic quality. It’s ethereal, and I wanted that element in the music I recorded.”

Keane appears on two of Subject to Change Without Notice’s 10 tracks. Throughout the entire album, Herring is supported by a core cast of musicians that mixes familiar faces with intriguing new voices. Longtime co-conspirator Jeff Sipe (who Herring played with in Project Z and the Aquarium Rescue Unit) contributes most of the drumming. “There’s only one Jeff Sipe,” Herring says. “He understands the music on a whole other level. He’s turned me on to so much. He’s not gonna just stop. He’s going to be evolving when he’s 80.”

Sharing bass duties are Jimmy Herring Band member Neal Fountain and Etienne Mbappe, who Herring met when doing a few shows opening for John McLaughlin’s current ensemble. “It’s amazing to me that Etienne, who is one of the most in-demand bass players in Europe, expressed interest in playing on this album even before I asked him,” Herring remarks. “I mean, he got on a plane from Poland and flew to Atlanta to play with us. I suppose I’m attracted to music from other cultures and I find it intriguing that maybe he, being from Africa and living in Paris, is equally curious about our redneck take on fusion.”

Fountain proves equally adept on his cuts. “I’ve known Neal for 20 years,” Herring says. “There are some tracks here, like our cover of Jimmy McGriff’s ‘Miss Poopie,’ that we’ve played live for a while now. Neal’s pocket on that is so amazing.” Fountain also appears on “Curfew,” a country stomp whose rollicking rhythm masks a devilishly difficult chord progression and features a dazzling Béla Fleck solo. Longtime Herring associate Matt Slocum contributes an array of keyboards—from frothy Hammond B3 to evocative acoustic piano—and Tyler Greenwell, of the Codetalkers and the Tedeschi Trucks band, contributes drums to two tracks.

More than any one instrumental voice, it is the eloquence of Herring’s compositions that form the forefront of Subject to Change Without Notice. While the album storms out of the gate with a brisk, gypsy-jazz-inflected swinger called “Red Wing Special” (with guest fiddle from Nicky Sanders of the Steep Canyon Rangers), it then relaxes into an evocative headspace courtesy of the evocative textures and powerful melodies of the widescreen “Kaleidoscope Carousel” and the gospel-tinged “Aberdeen.” The album also cycles through elegant acoustic moments (“Emerald Garden”) and churning gutbucket funk (“Bilgewater Blues”).

The covers assayed on Subject to Change Without Notice represent three key pillars of Herring’s musical sensibility. George Harrison’s “Within You, Without You” pays homage to both Herring’s love of melodic pop and of traditional Indian music and an expertly executed reading of the melody followed by a blistering modal solo played over a drone. Herring’s articulation throughout Subject to Change Without Notice—sometimes achieved with the use of the Stratocaster’s whammy bar (a device Herring has only recently begun experimenting with)—is consistently impressive, displaying a previously unheard, movingly vocal quality. “Miss Poopie,” learned from a Jimmy McGriff recording, acknowledges Herring’s debt to classic jazz, but is rendered with both authority and imagination. “A good cover,” says Herring, “is faithful to the original melody, but hopefully casts it in a new light and brings something unique to it.”

Herring pays tribute to the immense compositional and technical influence of John McLaughlin with a rendition of the Mahavishnu Orchestra’s “Hope,” with a searing solo statement from guest saxophonist Bill Evans. “The original recording is a mantra of sorts, it’s only 2 minutes long it didn’t have any solos on it,” says Herring with a smile. “I knew I one day wanted to record one of McLaughlin’s songs, but then I say to myself ‘Why bother? John McLaughlin already did the best possible solo on his version.’ But John didn’t play a solo on this one!”

From first note to last, Subject to Change Without Notice is marked by a careful balance of improvisational fervor and song-like delicacy. “Every one of my collaborators on this record surprised me,” says Herring. “They all took the time to compose their own parts. I needed people to not just hack away to playing away at a chart, but to come up with cohesive parts that fit into the music like the pieces of a clock. They all rose to the occasion.

“These are not necessarily complicated songs,” Herring continues, getting at the core of what makes Subject to Change Without Notice so refreshing. “When I started playing with Bruce Hampton in ’89, his band was all about simplicity. One of the biggest lessons I learned was the simpler the music was, the easier it is to be yourself. It’s easier to stretch it, to bend it, and to inject your personality into it. The more complicated it is, the easier it is to be a prisoner to it. With simple music, you can improvise around and within the melodies.

“The album jumps genres, but that’s not really intentional,” Herring concludes. “I was just trying to express the other parts of music that I love that I’m necessarily known for, things I haven’t done before. But it’s ironic: I play instrumental music and all I want to do is be a singer. I’m 50 now, and the older I get the more I want to be the singer. I want to play melodies that have substance.”