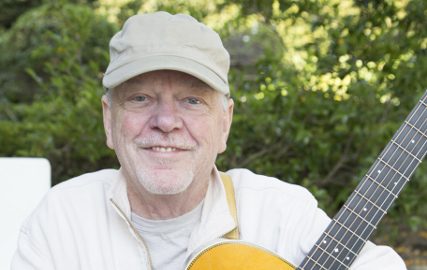 In 1967, a young musician from Denver was invited to play steel guitar on what would become the final
album by Buffalo Springfield. Soon after, he – along with Richie Furay, George Grantham and Jim
Messina – would form the seminal West Coast country-rock band Poco. Over the next five decades,
alongside band mates that would also include Paul Cotton, Randy Meisner and Timothy B. Schmit, he
became not only the musical core of the band, but also the writer and vocalist behind hits including
‘Rose Of Cimarron’ and the #1 smash ‘Crazy Love’. Now the singer/songwriter/multi-instrumentalist who
remains the heart and soul of Poco has made the most surprising statement of his 50-year career.

Waitin’ For The Sun is the debut solo album by Rusty Young.

“I’d intended to retire from the road,” Rusty admits. “I was certainly slowing down, wanting nothing
more than to spend more time at home gardening and fishing. But a fan reached out saying that he had
a new artist-friendly record label and asked if I would consider a solo project. I had been offered solo
deals back in the ‘70s, but always felt Poco was more important. But I feel I’m now the best I’ve ever
been as a singer and songwriter, and I have a better grasp of the music than ever before. And I realized
that this was the perfect time to do something that could be a really rewarding part of my legacy.”

The label chief who’d approached Rusty was in total agreement. “I was a longtime Poco fan, but really
fell in love with the band once Rusty became one of the predominant songwriters and vocalists in the
group,” says Kirk Pasich, President of Blue Élan Records. “His role was often overshadowed by others,
particularly given Jim Messina forming Loggins & Messina, Randy and Timothy joining the Eagles, and Richie doing Souther-Hillman- Furay.  But Rusty Young always embodied what has made Poco such a
unique and lasting American band. I knew that being involved with his very first solo record would be
special. So when Rusty asked us what kind of album we wanted, we said ‘What kind of album do you
want to make?’”

Waitin’ For The Sun is the sound of a hit songwriter, roots innovator and Grammy-nominated steel
guitar legend exploring and expressing a lifetime of music influences. “I learned how to write songs not
only from the guys in Poco, but the people I hung out with, too,” explains Rusty. “People like Neil Young,
Stephen Stills, and Gerry Beckley from the band America all made a big impression on me. My
grandparents, who were professional musicians in the ‘20s and ‘30s, have always been a huge
inspiration. As the sole writer on this record, I got to visit all kinds of different places that relate to my
musical heritage and experiences. Most of all, I wanted to take people on a journey that was fun to
listen to from the first note to the last.”

Produced by Rusty and longtime Poco bassist/vocalist Jack Sundrud – with assistance from the legendary
Bill Halverson (Crosby, Stills & Nash, Eric Clapton, Emmylou Harris) – and mixed/mastered by Joe Hardy (ZZ Top, Steve Earle, The Replacements), the album’s 10 songs first came together in the hours just before dawn. “I live with my wife Mary in a cabin that overlooks the Mark Twain National Forest in
southern Missouri, and got in the habit of waking early to watch the sun come up,” Rusty explains. “Just sitting there with my guitar, loving where I live and thinking about how far I’ve come and how lucky I’ve
been. After a while, the songs just poured out of me.”  The album was recorded at Cash Cabin in
Hendersonville, Tennessee, the former home recording studio of Johnny Cash and June Carter Cash.
“June’s old piano is all over the record,” Rusty enthuses, “and I got to play Johnny’s ’57 Les Paul.” Rusty
also played steel and acoustic guitars, dobro, mandolin and banjo, with the current configuration of
Poco – Sundrud, keyboardist Michael Webb, and former Flying Burrito Brothers drummer Rick Lonow –
filling in the rest. “They are, quite simply, the best musicians I know,” Rusty says. “You can’t separate me
from the sound of Poco, but I wanted to take the Poco sound – the songwriting, the vocals and the
playing – to the next level. The goal of this album was to go one step beyond.”

Waitin’ For The Sun opens with the shimmering title track that captures those early morning moments
of inspiration. The vintage bounce of ‘Honey Bee’ – featuring guests Jim Messina and George Grantham
– pays tribute to the musical gifts of Rusty’s grandparents. ‘Heaven Tonight’ is a lovely Beatles-esque
ballad, ‘Innocent Moon’ soars on gorgeous harmonies, and ‘Down Home’ is fueled by Rusty’s mountain-
music mastery. ‘Sara’s Song’ is the heartbreakingly beautiful ode Rusty wrote for his only daughter’s
wedding day, and ‘Gonna Let The Rain’ is a potent dose of rock & soul. The driving guitars of ‘Hey There’ are reminiscent of Poco at its very best, while the haunting instrumental ‘Seasons’ showcases Rusty’s distinctively melodic steel guitar. But the album’s most talked-about track may be the warm and joyful ‘My Friend’, featuring Richie Furay and Timothy B. Schmit. “I could have done that thing where I asked everyone I’ve ever known to play on the record,” Rusty says. “But I only wanted to work with a select few who were important to me. ‘My Friend’ is about Poco over the years and the friendships we share to this day. That’s why I called Richie and Timothy; the song is about them.”

Today, Rusty is looking forward to touring in support of this new disc as well as planning a series of
special concerts to celebrate Poco’s 50th anniversary. Most of all, he’s enormously proud of an album
that has been, in a sense, 50 years in the making. “I’ve been fortunate to have had a magical career,” he
admits. “From the moment I was called to play on the Buffalo Springfield album, all through Poco, and
now to this solo project, things have just fallen into place. I’ve worked really hard to be the best I can be,
and I think this album is the proof.”

For Rusty Young – and Waitin’ For The Sun – the future is looking brighter than ever.