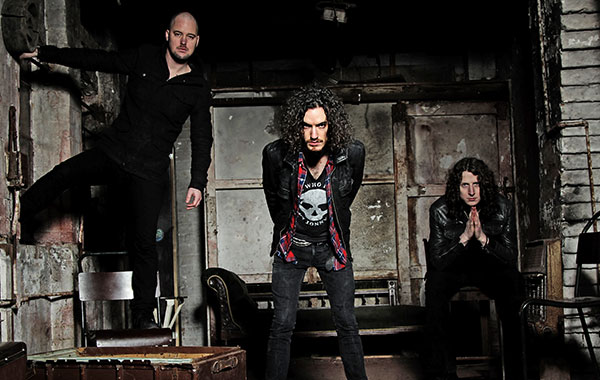 RavenEye, the UK-based rock trio was formed in 2014 by 25-year-old, multi-award winning guitarist/singer Oli Brown, along with drummer Kev Hickman and bassist Aaron Spiers. Since then, RavenEye has been slamming Euro – audiences with their signature rhythmically-heavy riffs and incendiary live show performances.

It may sound like the beginning of a good joke, the two Englishmen and an Australian…but the truth is, all three have travelled different paths, literally and geographically, up until the band’s formation last year.

Oli Brown has spent ten years touring the world under his own name and in that time, he signed to the Ruf Records label, released four albums and established himself as one of the most formidable guitarists/front men on the UK scene. His work as a solo artist prior to RavenEye also earned him supporting gigs alongside such artists as Jeff Beck, Buddy Guy, Johnny Winter and Joe Satriani. Brown states, “I’ve been looking to find the right people to get together with for so long; it’s something we’ve all had a craving for individually. I’m finally performing with two killer musicians, who are wicked on stage and are also close friends, it’s amazing how music can make people connect so differently.”

Kev Hickman has also seen his fair share of international touring, honing his unforgettable stage presence into an intense, hi-octane performance. Hickman’s natural abilities have taken him through working with two-piece hard rock bands, to the passionate performances of the studio sessions, to the journeyman’s live session work for various different artists/bands. As well as performing in all these various manners, Hickman has showcased his drumming in a series of YouTube videos, collecting over hundreds of thousands of views to date.

Aaron Spiers packed up his life in Australia, charging into the UK in 2012 looking to break into the European market. Since then, Spiers has established himself on stage as a force to be reckoned. He has also released several solo albums, written several orchestral scores in Australia and played live shows extensively. According to Spiers, “RavenEye is really trying to make our live show the greatest thing about the band. We obviously are focusing on writing songs, aim to have amazing recordings and try to look dashing in our band photos, but what we really want, is to be the band that can melt faces with our live show. We want to create an energy that you cannot deny – that will convert everyone and anyone to the way of the Raven.”

RavenEye’s new EP, featuring five amazing tracks, is scheduled for release in April 2015. “Get it Started” was written as an opener, to get the whole thing kicked off. It’s been killer to play at festivals. We’re new to many areas, so people don’t automatically know what to expect. It’s fun to crash in loud and in your face. “Breaking Out” strengthened the band from a songwriting perspective. As soon as the song was recorded, it defined what RavenEye’s musical foundation would be – heavy, hard and fuzzed out rock. The song is about “breaking out” of personal conformities. The lyric “I am the soldier of my war inside” is a representation about the constant battle between what you feel you should do and what you really want to do. Sometimes. it can get so easy to obscure your own visions because of other people’s formalities. “Run Away” is about how hard it can be to realize who’s dragging you down until you take a step back and have a look; “Hold your breath to the will of the hopeless.” Brown wrote “Hey Hey Yeah” with the intention of capturing that “summer-fest” feel. Its tempo has you rocking your head and singing about having a good time, doing who-knows-what without a care in the world. Brown says, he wanted “You Got It”, the live show finale, to really be something different. The EP recording is one version, heavy with a short lead break, but since using “You Got It” to close our shows, the energy vibe is picked up by the end and it all gets a little wild.

Soon after their initial meeting, these three talented musicians knew this band would be their musical future…so, began the wild and exciting journey of RavenEye.