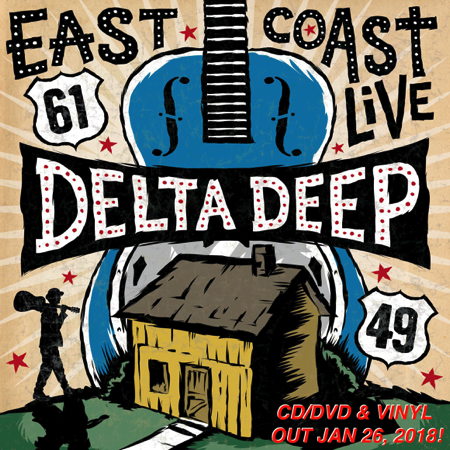 The group’s self-titled debut was released in June 2015 entering iTunes Blues charts at #2. DELTA DEEP immediately hit the road performing at festivals and concert venues across the country. Critics lauded the band, with Elmore Magazine declaring, “Delta Deep is a rocking force due to bring down any house– historical or modern.” While San Francisco’s BAM Magazine said, “the live experience for Delta Deep is one not to be missed…Debbi Blackwell-Cook is mesmerizing!”

Collen, widely known to millions of rock ‘n roll fans for his iconic albums with Def Leppard, recently explained why they decided to put out this live album and DVD. “We recorded every night of our 2016 tours, east and west coast, expecting to pull out the best performances from different cities. But we managed to capture one of those special, magical nights where all the stars fall into place in Pawling, NY at Daryl’s House. This whole album was recorded that night. It was so relaxed but we were so on fire at the same.” The musicians of DELTA DEEP bring their varying experiences from all corners of the music spectrum together to make a unique stew of blues-rock-n-soul. Collen also adds, “The intention was never to have a DVD addition to the cd but seeing the performances live and the fact that Daryl’s House also video records its shows was an added bonus for us.”

To order their self-titled debut: