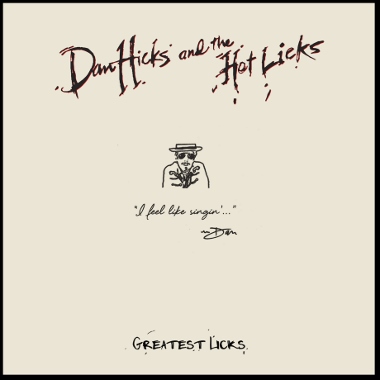 Dan’s Memoir, I Scare Myself, set for Release in April

“ ‘I Scare Myself’ and ‘It’s Not My Time to Go’…I think they’re two of the best songs ever written.”  – Elvis Costello

“Dan Hicks is huge for me, and I listened to him while making our first album. It’s one of the things that spurred our ‘Big Ten Inch Record.’ “

(Encinitas, CA) February 6, 2017 – Today, as we mark the first anniversary of Dan Hicks passing, Surfdog Records is honored to announce the release of Greatest Licks – I Feel Like Singin’, an extraordinary compilation album paying tribute and celebrating Dan’s life and legacy.

Called “An American Treasure,” by Elvis Costello, Dan created an iconic blend of hipster jazz, gypsy swing and country that still resonates as strongly today as it did when Dan Hicks and the Hot Licks came roaring onto the scene with their unique, genre-bending sound in the late 1960’s

Greatest Licks is set for vinyl, CD and digital release on February 24, 2017.   Starting February 10th, those placing pre-orders will receive a never-before-released version of, “Strike It While It’s Hot!”  In addition, the album also includes a never-before-released version of “I Don’t Want Love.”  All tracks on “Greatest Licks” were re-mastered for vinyl from the original analog tapes.

The collection was produced by Dave Darling (Brian Setzer, Glen Campbell) and Dave Kaplan, owner/CEO of Surfdog Records and a lifelong fan of Dan’s, “Some of my favorite and fun times were making music with Dan,” said Kaplan.  “I am really proud to have worked with him over the past 17 years, and to call him a friend.”

Dan Hicks and his music is revered by some of music’s beloved legends including Tom Waits, Willie Nelson, Steven Tyler, Jimmy Buffett, Rickie Lee Jones, Brian Setzer, Bette Midler and so many others.

In August of 1973, after releasing three critically acclaimed albums, appearing on the cover of Rolling Stone Magazine and just as the band was enjoying commercial success with “Last Train to Hicksville,” Dan succumbed to his own internal and external pressures – breaking up the band and becoming reclusive.   “Where’s The Money?”, “Striking It Rich” and “Last Train to Hicksville” were all released at the height of the band’s popularity, but for Dan, it was time to move on.  He continued to write and record, but would eventually embark on a 22-year hiatus from recording as a frontman.

Years later, Kaplan remembered Hicks as an artist who captivated and touched his heart as a youngster, whose music and performance during an appearance on the Tonight Show with Johnny Carson, had reached through the television and inspired him. Hicks’ impression on Kaplan was so profound, that when Kaplan’s work allowed him the means, he tracked Dan down and convinced him to sign a new deal – releasing records for his Surfdog imprint.  It was the start to the prolific final 17 years of Hick’s career and life – with the release of Beatin’ the Heat in 2000, featuring guests Tom Waits, Rickie Lee Jones and Brian Setzer.

Sadly, at the time of Dan’s passing, he was only mid-way through finishing his memoir.  Fortunately, author Kristine McKenna (former LA Times critic and co-author of David Lynch’s “Live & Work” among many other notable books) picked up where Dan left off and has finished his extraordinary life story.  “I Scare Myself” will be published by Jawbone Press on April 18, 2017, in softcover and very limited-edition hardcover editions.  It includes a heartfelt forward by life-long fan, Elvis Costello and afterword by friend and former record label boss, Tommy LiPuma.

Since the beginning, Hicks deftly blended elements of multiple American musical art forms to create a sound that the New York Times calls “defiantly unfashionable, proudly eccentric & foot-tappingly catchy.”  His lyrics range from the simply sublime to the sublimely ridiculous, all presented with his uniquely skewed and inscrutable touch.  Songs like “How Can I Miss You When You Won’t Go Away?” as described again by the Times, “display his dry and often absurd wit, as did his gently self-mocking stage presence.”  But Hicks had his serious side as well; “I Scare Myself”, described as “a longtime staple of his repertoire, was a brooding, hypnotic ballad about being afraid to love.”  Hicks’ irresistible sense of rhythm, hip lyrical styling, laid back vocalizing, and infamous on-stage wit lasted well through his final recordings on Surfdog.

Hicks was revered by his musical peers, never following the status quo.  As friend & famed producer Tommy LiPuma put it, “Dan was short on bullshit, and long on talent.”  Featuring 11 classic Dan Hicks and the Hot Licks songs (the CD & digital versions contain a 12th bonus track), this exceptional anthology from one of music’s true originals, showcases Hicks’ musical genius and encapsulates his unparalleled career.

For Press Use Only, to stream the album:

Pre-order “Greatest Licks – I Feel Like Singin’” at the following outlets:
Amazon: https://www.amazon.com/Greatest-Licks-Feel-Singin-Download/dp/B01NAQ4YN0/ref=tmm_vnl_swatch_0?_encoding=UTF8&qid=&sr=

Track Listing for Greatest Licks – I Feel Like Singin’: